This week, Ubique Tech celebrated the passing of the Americans with Disabilities Act (ADA). 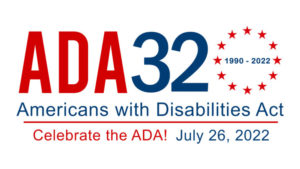 July 26th was the 32nd anniversary of the signing of ADA. This act « prohibits discrimination against people with disabilities in areas, such as employment, transportation, public accommodations, communications and access to state and local government programs and services. »

ADA was modeled after the U.S. civil rights movement. The inspiration to pass the legislation was rooted in our nation’s centuries-long struggle to form « a more perfect union ». The Act stemmed from the fundamental concept that we are all different. We all deserve to be treated with equity, humanity, and respect.

The ADA has also had a global influence.

« Crucially, this legislation has also become a model for lawmakers and activists around the world seeking to end discrimination against people with disabilities in their countries, » according to a 2020 report by National Geographic. « Since 2000, more than 180 countries have passed legislation inspired by the ADA. »

The disability community has made enormous gains in the past three decades, though millions of people with disabilities still face barriers, discrimination, and ostracism in our society.

At the same time, the disability community is still making gains. Pressure from disability advocates has helped shape the country’s response. Learn more about the five important federal laws that protect individuals with disabilities from discrimination in employment and the job application process.